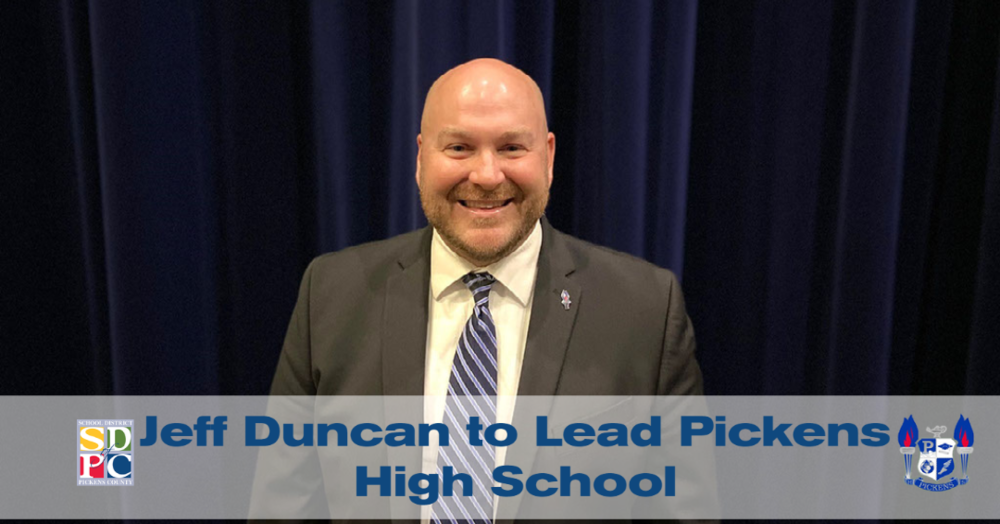 On Monday, August 9, 2021, the School District of Pickens County Board of Trustees approved the Superintendent’s recommendation to transfer Mr. Jeff Duncan to become principal of Pickens High School. This follows the departure of former principal, Dr. Corey Willimon, as Willimon has been named new Director of Secondary Education for the School District Five of Lexington & Richland Counties.

“This is a great opportunity for Dr. Willimon and today’s announcement is bittersweet due to his growth and the direction of Pickens High School,” said Superintendent Dr. Danny Merck.  “We have been very impressed with Mr. Duncan as principal at Edwards Middle over the past seven years. Having worked in the Easley, Pickens, and Daniel attendance area, he is well prepared as a veteran principal and we are very excited to see what he will do as leader of Pickens High in the future,” said Superintendent Dr. Danny Merck.

"I am extremely excited for the opportunity the superintendent and board of trustees have given me," said Duncan. "I'm looking forward to building strong relationships with the students and staff, as well as the parents and Pickens community. As a 1998 graduate of Pickens High, I understand the pride and love that our community has for our school. We all will need to work closely together to ensure the success of our students as part of the PHS family."

Duncan is married to Bonnie Duncan and has one daughter named Paige (9). They currently reside in Clemson.

Mr. Duncan will take over at Pickens High School on Monday, August 23. Please join us in congratulating Mr. Duncan