Back to Table of Contents

Click here for more information from the South Carolina Department of Education about the state's 10-point grading scale.

The progress of students in reading/language arts, mathematics, integrated studies (science, social studies, health, research and technology), work, and behavior habits will be based on the SDPC/South Carolina Academic Standards. Physical education, art, and music will be evaluated using the grading scale for each grade level as follows:

The state-defined numerical grading scale will be used on the report card.

​A general conduct grade will be given, using only S (Satisfactory), N (Needs Improvement), or U (Unsatisfactory).​ ​ 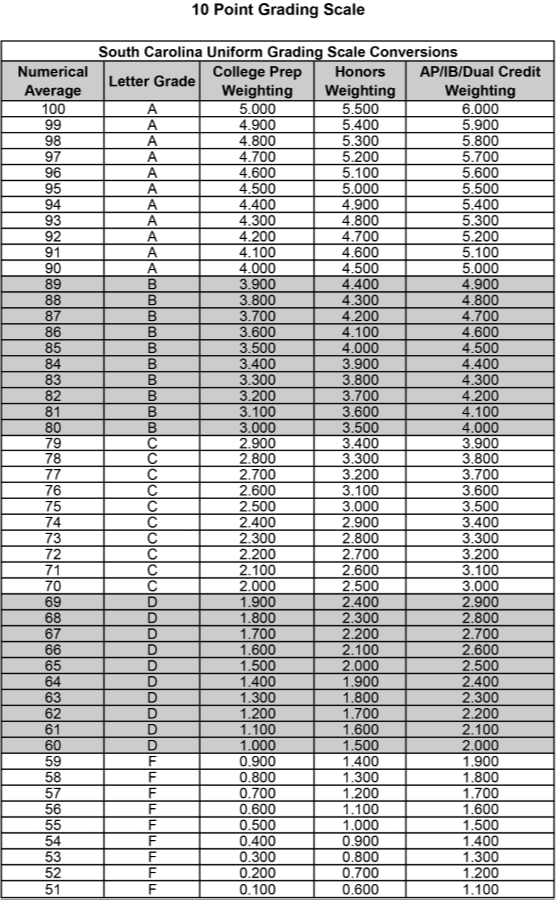 GPAs already earned by students will be recalculated on the basis of the revised policy’s three-decimal-point scale. All South Carolina public schools will use the following formula to compute all GPAs:

Computations will not be rounded to a higher number.

If the transcript indicates that the student has earned a passing grade in any course in which he or she had a numerical average lower than 60, that average will be converted to a 65 numerical grade on the new scale. See State Board of Education Regulation 43-273 for complete information on transfers and withdrawals.

If the transcript shows that the student has earned a grade of P (passing), that grade will be converted to a numerical designation on the basis of information secured from the sending institution as to the appropriate numerical value of the P. If no numerical average can be obtained from the sending institution, the student’s cumulative transfer GPA will be calculated and the corresponding number equivalent will be assigned to replace the P.

A student’s grade point average and rank in class will be figured from the grade-point conversion chart included in the handbook. The uniform grading scale and the system for calculating GPAs and class rank will apply to all courses carrying Carnegie units, including units earned at the middle or junior high school level.

All report cards and transcripts will use numerical grades for courses carrying Carnegie units. Transcripts and report cards will specify the course title and the level or type of course the student has taken (e.g., English 1, Algebra 2 honors, AP U.S. History). The grading scale must be printed on the report card.

Report cards are sent home every nine weeks on the fifth school day following the end of the nine-week grading period. Dates are listed on the official SDPC School Calendar. Dates are subject to change as a result of inclement weather. If you do not receive a report card on these dates, please notify your child’s teacher or the school office.

Schoology allows students and parents/guardians to check attendances, assignments and grades as well as see messages that have been sent from the school and district. If you need your child’s login information, please contact his/her school.

In the case of a disputed grade that cannot be resolved at the principal’s level, the SDPC Assistant Superintendent of Instructional Services shall have the authority to resolve the situation to the best interest of the student. A parent/guardian may appeal a disputed grade to the principal. A parent/guardian who chooses to appeal a disputed grade must do so in writing within 21 calendar days after the last day of the grading period in which the grade was received. The principal will render a decision on the matter within 20 working days after receipt of the appeal. The decision and the reasons will be in writing and copies sent to the appellant and the SDPC Assistant Superintendent of Instructional Services. If a grade is still disputed, a parent/guardian will have 7 calendar days to appeal to the superintendent, in writing, the principal’s decision. The decision of the superintendent is final.